While traditionally Indian street art had been an integral part of our cities and villages, being passed down generations within the performing tribes, today these professions are fast disappearing. In Delhi, the street performers – puppeteers, snake charmers, street magicians, jugglers, tight rope walkers, traditional impersonators, contortionists, singers and dancers – are mostly situated in slums like in all other big cities of India. They face immense discrimination and harassment, due to laws that do not distinguish between busking and begging, along with the diminishing respect for traditional performing arts in India. Indian Street Performers Association Trust is trying to raise awareness on busking as an artistic expression and advocating for opening up public spaces for street performance. 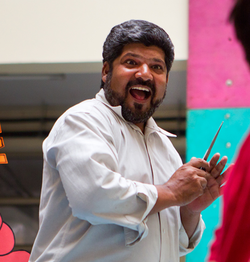 Ishamudin Khan is a traditional Indian magician who has been recognised as one of the top magicians in the world for his performance of The Great Indian Rope Trick in 1995. A part of magicians’ community of Madari, he has been the leading voice for the rights of street performers in India and set up the Indian Street Performers Association Trust in 2013. Ishamudin has performed across the world from Japan to Ireland and lectured in various universities on the urgent need to save the dying traditional arts of India.